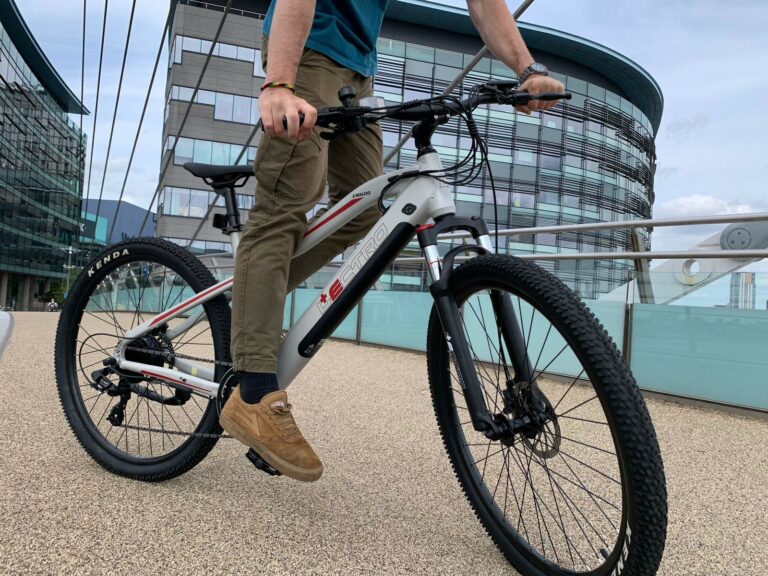 Indian-owned Manchester-based bike company Insync Bikes is reinforcing its position as one of the UK’s prime bicycle brands by launching a new range of ebikes for the UK’s independent bike dealer (IBD) network under its Lectro brand.

Insync Bikes Head of Marketing Ash Sood said the first consignment of Lectro’s are available at Insync’s new 60,000 square foot distribution centre in Trafford Park.  He said a total of 5000 of the Manchester designed Lectro’s will be made this year for the UK market ranging for mountain bikes to unisex commuter bikes. The range is being built at Insync’s parent company Hero Cycles’ 100-acre Cycle Valley in Ludhiana, in India’s Punjab region. Hero is the world’s biggest pedal bike maker by volume.

“We’re really excited to unveil this latest bang up-to-date Lectro ebike range,” he said. “We’ve listened carefully to our IBD partners and produced a range of ebikes that is affordable, comfortable and high spec.  We’re really proud the range has been designed by our talented design team here in Manchester together with our teams in Germany and India.  The new Lectro range is pound-for-pound one of the best on the market today in terms of quality of build and spec to price. It is priced in the mid-range market between £1100-£1600 and is aimed at recreational riders as well as commuters. Notable features include sleek battery integration on the frame, high torque output and ergonomically designed frames for a quick, nimble riding experience.”

Mr Sood said the Lectro range is aiming to give families more affordable transport options, as fuel prices rise, especially in towns and cities like Manchester, Birmingham, London, Bristol, Cambridge, Edinburgh and Glasgow which are investing in extensive cycle lanes.

“Ebikes are the future, they are affordable, sustainable and terrific for health and well-being” he said. “Insync wants to be at the vanguard of cultural change as cities make the transition to e-mobility. To help drive this change Insync will start manufacturing ebikes right here in Manchester this year producing 50,000 ebikes over three years with an ambition to scale up to 30,000 ebikes annually. The production line will make ebikes for all our brands including Lectro, Viking and HNF.”

Insync Bikes executive director Raman Awasthi said the company is planning to double its share of UK bike market to 20pc after selling 186,000 bikes in 2021. Its new Trafford Park headquarters opened in May is growing its distribution capacity to more than 500 bikes a day. Underling Insync’s growing presence in the UK in May it was named the seventh fastest growing Indian company in the UK by Grant Thornton after seeing growth of 43 per cent in 2021.

Hero Cycles has the capacity to produce around nine million bicycles and ebikes each year adding a further 60pc capacity to its global operations eventually reaching around eight per cent of global production share.

Hero Cycles Limited was founded in India in 1956. It is the largest bicycle manufacturer in the world by volume producing 19,000 cycles per day and 5.2million per year. This represents one out of every 20 of the world’s bicycles. Hero Cycles has manufacturing units in Ludhiana (Punjab), Bihta (Bihar) & Ghaziabad (UP). It is part of the Hero Motors Company which employs circa 8,000 staff.

In August 2015, it acquired Manchester based British brand Avocet Sports with 51pc stake targeting high-end bicycle market in Europe and now has full ownership. In 2015, it also acquired Firefox Bikes – India’s largest premium bicycle brand with an established presence Pan-India through a network of 160 outlets. In 2016, it acquired a majority stake in Sri Lanka’s leading bicycle manufacturer BSH Ventures, further boosting its manufacturing capacity. As part of major expansion plans across Europe it launched the £2million Hero Cycles Global Design Centre (HGD) in Manchester, UK, in January 2017. In November 2019 the company changed its name from Avocet Sports Ltd to Insync Bikes Ltd.