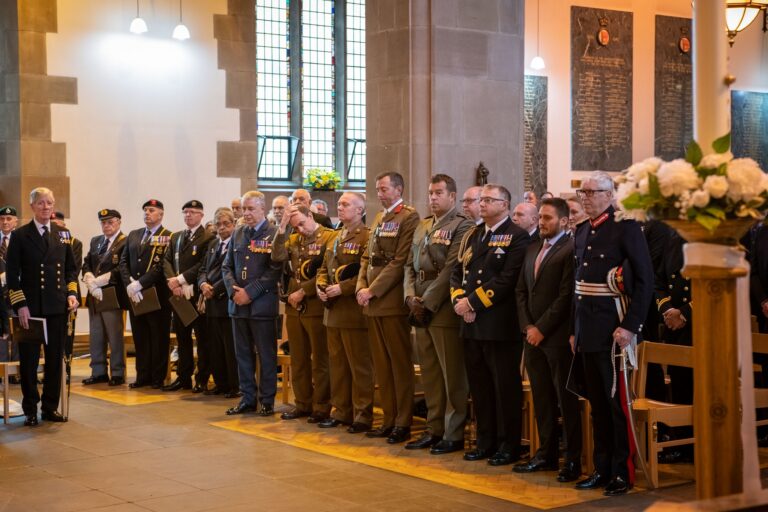 Ship owners Atlantic Container Line (ACL) and Cunard have marked the 40th anniversary of the ‘darkest day in ACL’s history’ when its vessel, the Liverpool registered Atlantic Conveyor, was struck by two Argentine Exocet missiles killing 12 crew during the Falklands War.

The event took place on May 25, the exact anniversary of the attack, with a wreath laying ceremony at the Merchant Navy Memorial on Liverpool’s Pier Head followed by a service of remembrance at St Nicholas Church whose gardens include a memorial to the Atlantic Conveyor. The Conveyor became the first British merchant ship to be lost to enemy fire since World War Two, its captain 57-year-old Ian North was one of the last to leave the ship and died with 11 other crew members from a total crew of 33, a further 126 service personnel are estimated to have been on board. Captain North was posthumously awarded the Distinguished Service Cross for his actions which helped save many lives.

In total six ACL/Cunard merchant seamen, including Captain North, died when the vessel, which had been requisitioned by the Government, was struck by the missiles and a fierce fire broke out. A further three Royal Navy personnel and three Royal Fleet Auxiliary crew also perished (see notes to editors). The Conveyor’ssister ship the Atlantic Causeway was also deployed in the Falklands Task Force and completed her mission safely.

“I boarded the Atlantic Conveyor many times during the late ‘70’s while she was berthed in New York for cargo operations. I had the distinct pleasure of meeting Captain North on multiple occasions for ship parties and staff training sessions. He was the quintessential British sea captain: an expert on every aspect of his ship, close to all of his officers and crew, always helpful, always witty, always professional. I remember the shock I felt the day we learned we had lost him and so many of his crew. I remember the shock I felt to learn that the Conveyor had gone down. It is one thing to read about events in history books, but the impact is different when you knew the people and walked the ship. Let us always remember and honor these brave men who lost their lives forty years ago. Their country called and they answered. May they rest in peace.’

“Our ships, and their crews who volunteered to sail on them as part of the South Atlantic Task Force 40 years ago, played a significant part in the Falklands Campaign.  The attack on the Liverpool ship Atlantic Conveyor on 25 May 1982, and its loss with six Cunard crew and six service personnel was the first sinking of a British Merchant ship in action since World War 2. It is entirely fitting that we return to the Conveyor’s homeport, and Cunard’s spiritual home at Liverpool, to mark this important anniversary of lives lost.”

Gary Doyle, Group Harbour Master at Peel Ports Group said: “Liverpool has long had a vital role as a base for naval operations, as a maritime logistics hub for our national defence. That’s one reason we are proud supporters of the Armed Forces Covenant that helps provide new careers for veterans and support for reservists. Memorial events act as an important reminder to current and future generations about the value of peace and the sacrifices made by service personnel and the merchant navy. Our thoughts during the commemoration will be with all those affected by the tragic events that occurred during the Falklands War, including the sinking of the Atlantic Conveyor. I know all colleagues at Peel Ports will support and respect this important event.”

“Although the Atlantic Conveyor was requisitioned to transport Harriers to the front line, planners soon saw the potential for trying something new. By the time her brave volunteer merchant crew took her out of Plymouth with a tri-service military party on board, she’d been transformed into a makeshift merchant aircraft carrier, stuffed with stores and munitions, that could refuel, arm, launch, recover and repair rotary and fixed-wing aircraft.  Despite the myriad problems resulting from her breakneck conversion, her two crews worked together with humour, initiative, and resilience to

solve them right through to the final conflagration and misery of her abandonment. It was my privilege and honour to serve alongside such men.  On this anniversary, I remember those I tried to save, the heroes who didn’t return, and my thoughts go out to those who still carry the burden of what befell them all those years ago.”

The 40th Anniversary Service in Liverpool also marks the day on which final preparations were being made on board Cunard ship the QE2 40 years ago for the transfer of more than 3,000 British troops and their kit at Cumberland Bay, South Georgia in readiness for landings on the Falklands.

At the time of the attack, Atlantic Container Line (ACL) was made up of a consortium comprising Cunard Steamship Company, Wallenius Lines (OW), Swedish America Line(SAL/Brostroms), The Transatlantic Steamship Company Limited (RABT) and Holland America Line (HAL) and the French Compagnie Generale Transatlantique (CGT). Today ACL has evolved into a separate stand alone shipping line and is no longer a consortium.

The Atlantic Conveyor was built on the Tyne by Swan Hunter and delivered to Cunard in 1970 as part of their contribution to the Atlantic Container Line consortium.

A meeting at the British Ministry of Defence on April 14 1982 decided the Atlantic Conveyor should be adapted to carry a number of Harriers and helicopters south, the Harriers were to replace expected combat losses.

The Atlantic Conveyor was not to be an aircraft carrier conversion, but primarily a transport vessel for Harriers and Chinook’s, source https://www.thinkdefence.co.uk/the-atlantic-conveyor/

She sailed from Liverpool the day after, bound for Devonport.

After arriving at Devonport on April 16 her conversion started immediately.

The modification package for the Atlantic Conveyor included covering the container hold with steel plates, fitting a Replenishment at Sea (RAS) system, creating a system of shelters and equipment stores on the deck using ISO containers/portacabins and installing additional communications equipment. The containers on the deck were used for storing fresh water and oxygen, accommodation for 100 personnel of all three services, and workspaces for maintenance. The stern container deck was also modified for helicopter operations.

On May 25 1982 thinking the Atlantic Conveyor was an aircraft carrier the 14,946 tonne ship was attacked by two sea skimming Argentine Exocet missiles. The missiles were fired from jets 28 miles away and were meant for the 28,700 ton aircraft carrier Hermes. The missile struck the ship in her aft cargo quarters and an intense fire started which swept through the ship. The evacuation took about 15 minutes and most of the survivors were picked up by other task force vessels within an hour of abandoning the Atlantic Conveyor. The attack came at dusk and a rescue operation to recover the crews continued through the night. It was confirmed that 12 men were killed, three on board and nine in the water including the Captain Ian North.