Polaris has renewed its agreement with LSC to extend its PR services, which are supplied at a special pro bono rate.  This will be the sixth year Polaris has worked for the ecumenical charity which supports around 50,000 seafarers each year and whose roots date back to the 19th century in Liverpool.

Polaris managing director Ben Pinnington said the although the profile of seafarers is high many issues remain unsolved.

“It is important for us as a company working in the maritime industry to have a positive purpose and highlighting the role of seafarers is one of the best things we can do,” he said. “All our team love supporting Liverpool Seafarers Centre and fighting for seafarers in the media. If one good thing has come out of covid it is the heightened awareness of our reliance on shipping and seafarers. However, big issues remain particularly around seafarer mental health and access to vaccines passports. We look forward to continuing the campaign and gaining more awareness and support for seafarers and LSC.”

LSC CEO John Wilson said he is pleased the centre will continue to fight for seafarers through the media and urged people to follow LSC’s popular Twitter feed: @Liv_seafarers for updates and news.

Polaris helped LSC to rebrand in 2020

Polaris work to raise awareness of seafarers also extends to the Merchant Navy Welfare Board and the Battle of the Atlantic Memorial campaign in Liverpool. 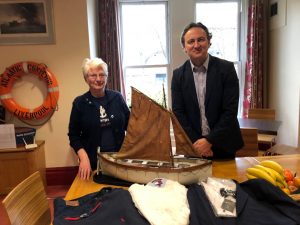