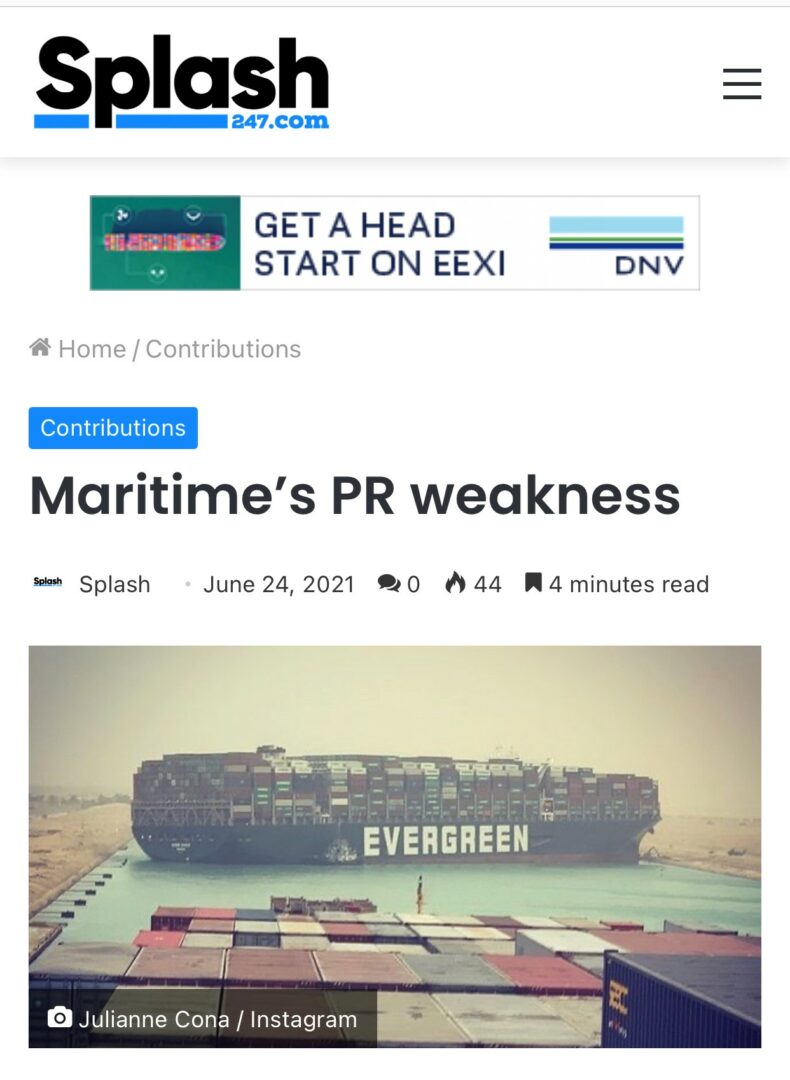 Two torpedoes have slammed into the reputational hull of the maritime industry recently. The Ever Given Suez Canal crisis and the Black Trail TV documentary. Both exposed the PR weaknesses that are well known in the sector – organisations are not comfortable with the media, often do not understand or value PR and prefer a low profile. This approach is increasingly untenable in a media saturated world where social media has given everyone a voice.

When the nearly 400 metre long Ever Given blocked the Suez Canal in March it thrust maritime onto the front pages worldwide. It was a golden opportunity to champion the industry and grow understanding. But the aftermath saw a criticism in the maritime media of the ‘faceless’ response. While this was evidently a complex crisis for the PR teams to deal with, with different organisations and cultures involved, all the latest media training teaches you – you need to front up in a crisis. Organisations cannot tie PR teams hands behind their backs. Can you imagine a major global media crisis involving a Virgin plane and not seeing Richard Branson on the media? It is unthinkable. Executives need to be visible in a crisis as it is in these moments that you find out what a company and its leaders really stand for. A crisis well-handled should see an organisation’s reputation enhanced with an empathetic spokesman sensitive to the human implications of the incident giving informed updates and answering difficult questions. So often where organisations go wrong is when they seem detached, cold or insensitive to the impact of a crisis. Maritime organisations need to be aware how the low-profile approach can backfire.

The Black Trail documentary meanwhile is the mother of all wake up calls. Billed as ‘how shipping pollutes the planet, avoid taxes and dodges regulations’ it falls into the ‘viewing from behind the couch’ category for maritime executives of a sensitive disposition. While it clearly had an agenda the programme raised valid points which required serious answers but the candid unguarded interviews with some Greek shipping executives were painful to watch. It goes without saying that no executive should give an interview without media training and pre prepared messages.

Maritime simply cannot go on in this way. Public and mainstream media scrutiny of maritime is only likely to increase as it becomes better known how the industry is responsible for carbon emissions equivalent to Germany.  Organisations need to undertake crisis horizon scanning understanding that the decarbonisation agenda is taking maritime out of its bubble blinking into the blinding sunlight of the climate change emergency debate. This means shipping lines, ports, shipyards, logistics companies and OEMs have to be in touch with public opinion on environmental matters. It is now expected that organisations demonstrate they are going green with hard evidence. The definition of PR is: PR is about reputation, the result of what you do, what you say and what others say about you. By far the most important element of this statement is what you do.  As PRs we are aware that the environmental agenda places massive pressure and responsibility on maritime businesses to listen and shape their operations accordingly, not green washing or purpose washing. This is not the soft world of CSR where companies did good things, which were not always fundamental to operations, and expected recognition. The advent of Environmental Social and Corporate Governance (ESG) in place of CSR is a tougher game altogether. We see ESG in action particularly in maritime finance where the Poseidon Principles have been signed by lending institutions responsible for $158billion roughly half of global ship finance. The signatories demand that ship owners meet the IMO targets for their fleets otherwise ships risk not being mortgaged.

Public relations is also changing. The era of PR being seen as a tactical tool, communications gloss or an add on to marketing is over. Astute organisations now use PR to shape their strategic direction. PR today is as much about listening as it is about broadcasting a message. If we expect stakeholders to believe in, and be influenced by, our messages we have to show we are prepared to listen and become an advocate of their message. Listening is the starting point of building trust and deepening relationships – the ultimate goal of PR. This is why organisations are making PR part of their C-suite to ensure they are in tune with their stakeholders, as well as public opinion on issues that effect them, giving them a considerable advantage over those who are not.

The world is a very noisy place. It is harder than ever to pierce through that wall of sound. Maritime organisations need to find their voice on the issues that matter most like climate change as well as the human stories of triumph and adversity overcome. This is not the time to be quietly hiding, tapping on the door of Government and the media with a sponge. We need champions so the immensity of maritime’s role in the world is heard, appreciated and acted upon.