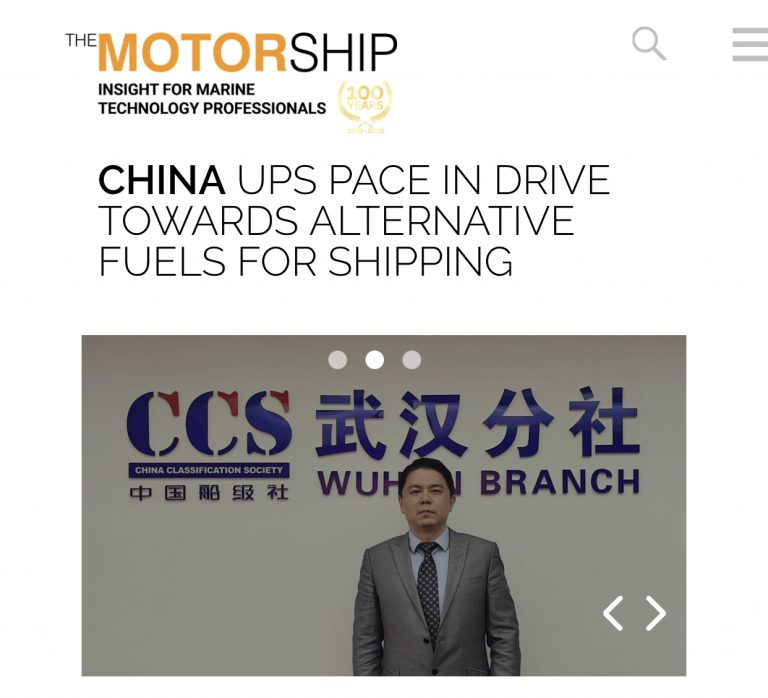 Thank you to the Motorship for reporting this feature written by our team for our client China Classification Society.  Read

In line with China’s aim to reach carbon neutrality before 2060, and to focus on ensuring its greenhouse gas emissions peak in the next decade, China Classification Society (CCS) Wuhan branch is stepping up its focus on alternative fuels.

This is just part of its work towards a zero-carbon future in line with President Xi’s announcement, to the United Nations in September 2020, that China will reach carbon neutrality before 2060 and ensure its greenhouse gas emissions peak in the next decade.

“The Chinese government has established a long-term goal to become a carbon neutral country by 2060,” said Jia Siqing, General Manager of Industrial Products for CCS Wuhan branch. “We must also reach the peak of carbon emissions before 2030. As the marine industry is one of the major sources of these emissions, it must make its share of the contribution to this inspiring target.”

CCS had been actively researching low or zero emission fuels long before these new targets were announced. For example, as far back as 2013, CCS was already exploring hydrogen and seeking to quantify its potential in everything from powering fuel cells to how to tackle a hydrogen-fuelled fire. At the same time, its researchers were also evaluating a host of alternatives, such as liquified natural gas (LNG), various alcohols, bio-fuels, ammonia and renewable electricity from wind and solar. They also looked at how these could be harnessed more efficiently with better power management systems. Even once a new technology is proven, CCS goes further, running exhaustive tests to decide if the application would be practical.

“Take the use of bio-fuel,” said Siqing’s colleague, Luo Xiaofeng, Director of CCS Rules & Research Institute in Wuhan. “With China having such a large population, we need all the available farmland to feed our people. This means bio-fuel isn’t a solution for us – we can’t grow crops for powering our ships.”

The rise of hydrogen

By contrast, hydrogen is abundant and is an ideal candidate as a zero-emission fuel in internal combustion engines. Hydrogen can also react with a catalyst to create electricity in a fuel cell, and so power an electric drive train. CCS published its first reliable guidelines for harnessing hydrogen as a commercial marine fuel as long ago as 2015, ‘Guidelines for Application of Fuel Cell System’. In 2017, this was followed by ‘Guidelines For Ships Using Alternative Fuels’. These guidelines were updated in 2020. The detailed research found a hydrogen-enabled ship could be as safe as one powered by conventional fuels such as diesel. However, this comes with caveats.

“No fuel is absolutely safe by nature,” said Jia Siqing. “Only good management can ensure that level of safety. We think that hydrogen has some very distinctive characteristics which make it easy to manage. So, in that sense, it is inherently safe.” Jia Siqing also supports the policy of allowing leaking gas to easily escape to atmosphere, rather than forming a gas cloud between decks.

“The marine environment has issues very different from land-use hydrogen,” he said. “These include vibration, high and low temperatures, tilting and swinging, damp and other stressors that need to be tested for verification. Hydrogen fuel cells are usually installed in a small engine space. We protect this space with an enclosure, and then discharge any leaked hydrogen through a ventilation system. Working with CCS approved companies, we have seen a lot of improvements, such as metal pipes for hydrogen, with all joints either welded or connected with gas-tight fittings. All the materials used should be resistant to hydrogen embrittlement and corrosion. We have specified that a seamless steel pipe should be used for transporting fuel, and the materials used should be made from austenitic stainless steel.”

The main downside of hydrogen is its low energy density and the challenges of storing enough of it to take a ship on a protracted voyage. To this end, CCS is researching the most cost-effective ways to store the gas in large quantities, and in how to combine it with other fuel sources to extend its range.

“Since hydrogen is the lightest natural element, more space is needed to store it,” said Jia Siqing. “We are looking at methods to create hydrogen at sea, such as the use of methanol or ammonia, which can be easily and cheaply transported. However, this still requires the addition of a fuel reformer for conversion. Methanol as a fuel is still accompanied by the production of carbon dioxide. Ammonia itself is corrosive and toxic, but as a zero-carbon fuel, it will have a wide range of applications in the future.”

Instead, the main focus is on carrying bulk hydrogen, enough for an entire voyage.

“We think liquid hydrogen may be a good contender,” Jia Siqing explained. “Alternatively, hydrogen can be stored in some organic compound in liquid form, but there may be some other issues with this technology. At present, in terms of storage methods, we still consider high-pressure gas cylinders as a viable solution.”

CCS is planning a series of real time tests on a purpose-built bulk carrier of 2,100DWT. The ship is currently at the design stage but is expected to be powered by four 130kW hydrogen fuel cells. A large bank of Li-ion batteries will also act as an energy reservoir. Once completed, the ship will be trialled along the Pearl River in Guangdong province, where it will carry operational cargoes. Reinforcing the data from these tests will be feedback from other sectors, such as the burgeoning Chinese electric automotive sector, as Luo Xiaofeng explained.

“Today’s car technology is tomorrow’s ship technology,” he said. “Hydrogen is a hot topic in China, so we work with other hydrogen-use sectors and universities to share the research. Breakthroughs elsewhere can help the marine industry. The safety of a new hydrogen system is the base line, then we develop the theory and economics of the various technologies, and soon we will be able to test them thoroughly in the Pearl River project.”

Luo Xiaofeng is realistic about the future, and appreciates that while the zero emissions target is achievable, in the short-term trans-ocean hydrogen technology will still need to be supported with low-carbon and hybrid systems for propulsion. He also feels that new hydrogen systems should be installed in brand new ships rather than trying to retrofit the existing fleet. Once again, safety is the main consideration, as this can be optimised in the design.

“Hydrogen is clearly the future,” Luo Xiaofeng concluded. “In China, we are asking all our stakeholders to help us to achieve the zero-emission solution for shipping, and no later than 2060. Throughout history, the human race has always found solutions to its problems, and our new knowledge of hydrogen systems will help Chinese shipping to meet the current climate challenges.”

In addition to conducting research on various forms of marine hydrogen fuel storage technology, CCS has also jointly carried out special research on the application of hydrogen fuel on ships with China State Shipbuilding Corporation. The research included  risk assessment, ventilation, fire-fighting, as well as other areas which are essential to the safety of hydrogen fuel-powered ships. Some of the other aspects of a marine fuel cell system included the storage of hydrogen as a fuel, the bunkering and fuel gas supply system and hydrogen piping.

The above studies were aimed to evaluate the feasibility, reliability and safety of hydrogen fuelled ships and provide support for the simultaneous development of relevant technical regulations. At the same time, CCS is now authorized by the China Maritime Safety Administration to research and develop the first domestic technical regulations for ships using hydrogen fuel, and it will be released at end of 2021.