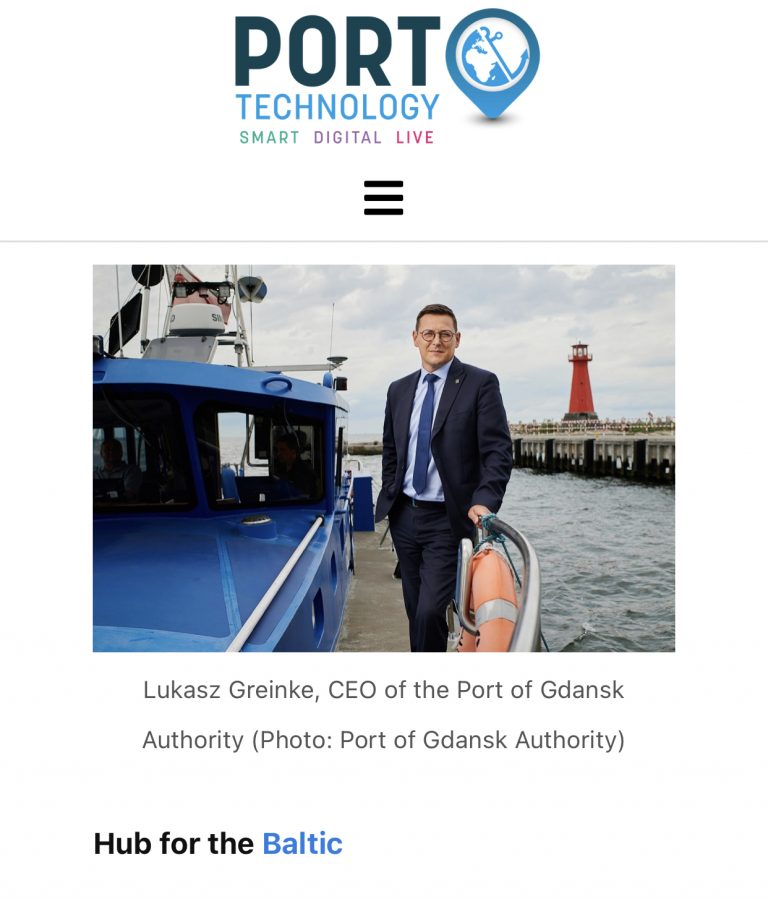 Thank you to Beth Maundrill editor of Port Technology for running this interview with our client the Port of Gdansk and its CEO Lukasz Greinke.

The Port of Gdansk, one of the largest seaports on the Baltic Sea, is stepping up infrastructure development, growth and connectivity.

The Port has recently announced over €1.3 billion ($1.58 billion) in infrastructure projects set to be completed in 2021.

Speaking to PTI spoke to Lukasz Greinke, CEO of the Port of Gdansk Authority, said it was important for the Port Authority to continue its investments and not to slow down.

At the end of 2020, the Port announced that it expected to handle more than 48 million tonnes of cargo in 2020, this despite the disruption to global trade caused by the COVID-19 crisis.

The performance means the Port of Gdansk has broken into the top 20 biggest ports in Europe for the first time ahead of Genoa and Dunkirk, which Greinke said was the Port’s greatest achievement of 2020.

“Investment and cooperation” are the two words Greinke chose to describe how the Port achieved a successful 2020 in the face of unique challenges.

“We know we are not an easy company to understand because we have a lot of different types of cargoes and businesses. We know that we should work with our stevedoring companies, with our operators as one team. That’s very important for us,” Greinke said.

“Through our investment we try to give these businesses the opportunity to be more competitive in the sea markets.”

When considering investment Greinke said he personally tries to have a good understanding of the business case presented by each company “because they are all different and we should support and understand this”.

Hub for the Baltic

Greinke said that across the entire Port he observed that some of the smaller terminals were more affective at reacting to the pandemic compared with some of the larger terminals, container and crude oil, which are much more reliant on the worldwide logistics chain.

However, this appears as a short-term issue and Greinke sees potential for growth in the container terminal.

Development of the container terminal has been ongoing since 2007 when DCT Gdansk built the new terminal, T1.

“DCT was a very good opportunity for the port to create something new, like a big hub in the Baltic Sea which can support the biggest ships in the world,” he said.

In 2016 DCT Gdansk completed the second terminal, T2, and right now more than 600 vessels per year enter DCT Gdansk, according to Greinke.

Greinke also noted that in December 2019 the container terminal doubled its capacity from 1.5 million TEU to 3 million TEU.

A new phase of expansion has now begun at DCT as there is a new investment plot of around 6.5 acres. Which will be used to develop a new storage yard and office buildings.

“As a Port Authority we are trying to implement a new road and rail system in the vicinity of DCT Gdansk, this also supports the City of Gdansk. As I said, the cooperation is an absolute must and is most important in this business.”

Having reached the goal of achieving a place in the top 20 European ports, Greinke said, “The most important thing for us is to complete some of the largest projects which are linked with the Connecting Europe Facility (CEF) funds.

“This is most important because we are replacing more than 500km of quays in our ports alongside the new rail and road systems.”

In total, Inner Port investment is valued at €125 million and is focused on the modernisation of the fairway as well as the expansion of quays and the improvement of navigation conditions in the Inner Port.

The reconstruction of the Dworzec Drzewny Quay is a project valued at more than €43 million and will enable the port to receive large ships.

All of the investment projects are leading to the ultimate goal of handling more cargo at the port across all sectors.

“I think in the next two to four years we should cross the 60 million tonnes mark for cargo,” Greinke said.