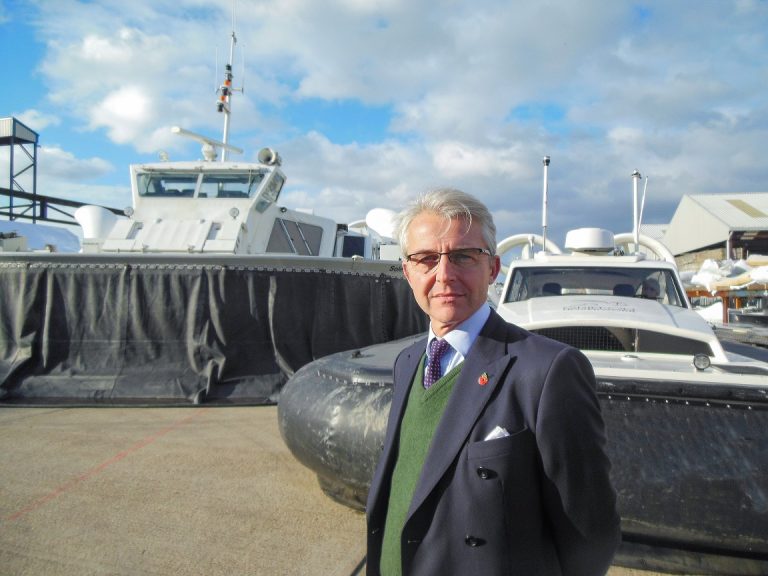 Southampton-UK based hovercraft manufacturer Griffon Hoverwork has delivered two of its new 995ED craft to clients in Hong Kong and Estonia (see film).

The deals have seen two eight-metre-long 995EDs made for the Hong Kong Marine Police and one for Estonian Border Guard. In total seven 995ED hovercraft have been built and sold since the model was unveiled at the ExpoNaval trade fair in Chile in 2018 with clients ranging from the Malaysia Marine Department to private customers. The 995ED entry price is around £650,000 with plenty of options, and the craft has capacity for eight people or up to four stretchers or any combination up to a maximum payload of just under a tonne making it suitable for a variety of roles. Top speed is 30 knots at full ‘all up weight’.

“Hovercraft like the 995ED are more effective, efficient and environmentally sensitive than ordinary patrol boats and RIBs as they can operate over shallow waters, debris and ice which boats cannot, moreover they have a big advantage with higher passenger capacity and payload than helicopters which are also extremely expensive,” he said. “In Hong Kong the 995ED is suited to operate over parts of the region’s shallow and highly congested waters counteracting illegal trade and fishing. This is in addition to the 380TD we recently sold to the Agriculture, Fisheries and Conservation department for research purposes. Meanwhile in Estonia, the 995ED is performing border guard operations over ground and ice. For these clients, the 995ED’s environmental benefits were important as the craft is quiet, fast and hovers above the surface without disturbing marine life. Boats operating in shallow water frequently damage their structure and propellers on rocks or ice but hovercraft have an air gap under the hull which makes them less vulnerable to hazards and more effective.”

Mr MacLeod-Ash said Griffon is seeing a recovery in the exports market with a good order-book and demand across Griffon’s range from large to smaller hovercraft together with the support services and consultancy the company offers.

“Overseas clients are coming to Griffon for quality,” he said. “Unfortunately, the hovercraft market is being cluttered with hovercraft being offered by manufacturers who do not have the knowledge and experience to design and build hovercraft that comply with IMO Code or Class rules. As the original hovercraft manufacturer set up by one of the early pioneers of the hovercraft, Sir Christopher Cockerell, Griffon Hoverwork leads the world in these standards of build and aftercare. The 995ED was the first hovercraft to achieve certification against the UK Hovercraft Code and Griffon generally builds to the High Speed Craft Code. Our hovercraft are always certified to the preferred Class Society for whichever country they operate in, and past examples include Lloyds Register, DNV-GL, ABS and the Korean Register.”

Mr MacLeod-Ash said a key design benefit of Griffon’s hovercraft hull is they are built of aluminium unlike competitor’s craft which are made of Glass Reinforced Plastic (GRP) also known as fibre glass.

“Aluminium is far more robust when the hovercraft is operating over a harder surface like a beach, flood debris or ice,” he said. “It is also much easier to repair with less training and fewer specialist tools. Furthermore, it is easier to inspect aluminium through-life and as a result cheaper to maintain. Because of the surfaces and areas that hovercraft are operated in, it is lower risk and cheaper through life to build in aluminium than GRP although this does make the initial acquisition price more expensive. Our experience supplying and sustaining hovercraft around the world has taught us that and several are still in service after 30 years of hard operations.”

Griffon Hoverwork Ltd (GHL) is at the forefront of hovercraft development and has been involved in the manufacture and operation of hovercraft since they were first conceived, over 60 years ago working alongside the hovercraft’s inventor Sir Christopher Cockerell. The company has hovercraft in all five continents and supports over 200 GHL craft in more than 40 countries.

Privately owned by the Bland Group, Griffon Hoverwork has achieved strong growth; it relocated its main manufacturing facility from Hythe to Merlin Quay, Southampton UK at the beginning of 2011, in order to increase manufacturing capacity. The company now uses lean techniques to design and manufacture high quality hovercraft for practical applications.

Griffon Hoverwork hovercraft are also in use by those responsible for national security and military operations, missions include:

Griffon Hoverwork enables its customers to engage in tasks in some of the most diverse and inaccessible areas of the world, from the jungles of South America to the frozen seas of the Baltic and Arctic. Tasks include search and rescue, fisheries protection, pollution response, border security, river patrol, flood and airport crash rescue, passenger ferry operations, survey work, cargo carrying missions and littoral military operations. Due to the specialised nature of hovercraft, Griffon Hoverwork provide a complete support solution, from consultancy to in country commissioning, through to pilot and engineer training and have a dedicated through-life support team for spare parts, modifications, overhauls and occasional brokerage.