Polaris’ brief to is help raise awareness in international maritime press, much of which is written in English and produced in the UK as well as organise for a group of reporters to attend the conference. 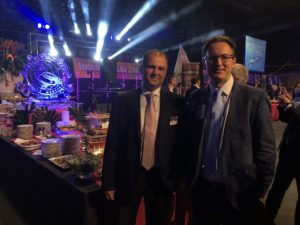 Polaris’ managing director Ben Pinnington said the company helped promote the event in 2018 and specialises in maritime and Poland.

“It is a dream come true and a great honour to be working with the Maritime Forum Gdynia 2019,” he said. “Gdynia is an inspiring maritime city and having attended the event last year we have seen its quality with 30 top class speakers and 600 guests.  There is a huge amount of newsy material for the media to take from the event with great insight into the shipyard sector, ports as well as shipping, finance and law. The Polish maritime industry is flourishing employing 112,000 people and generating €9billion euros for the economy. Added to this  the Polish national economy has grown at average rate of 4.2 per cent a year between 1992-2019, to become the seventh largest economy in the EU with a total GDP of €524 billion. So it’s a great time to focus on the Polish maritime sector as one of the key markets in Europe and the world.”

Ben said Polaris has developed strong links to Poland through family and business since 2011.

“We have worked for a range of Polish maritime businesses over the last few years including Intermarine in Gdynia and Baltec in Gdansk,” he said. “We know how to help Polish maritime companies, raise awareness in the English language maritime press which is read worldwide and presents a brilliant platform for communication. We are also working with a partner to help engage the Scandinavian media from a Baltec Sea trade perspective.”

The day-long event, now in its 19th year, takes place on October 11 in Gdynia at the conference centre of Pomeranian Science and Technology Park under the patronage of the Ministry of Maritime Economy and Inland Navigation, the Maritime Office, the Polish Investment and Trade Agency and the Polish Chamber of Commerce as well as other non-government organisations. The organisers of the Maritime Economy Forum Gdynia are the city of Gdynia and the Gdynia Development Agency.

To attend and for more information: www.forum.gdynia.pl/en/