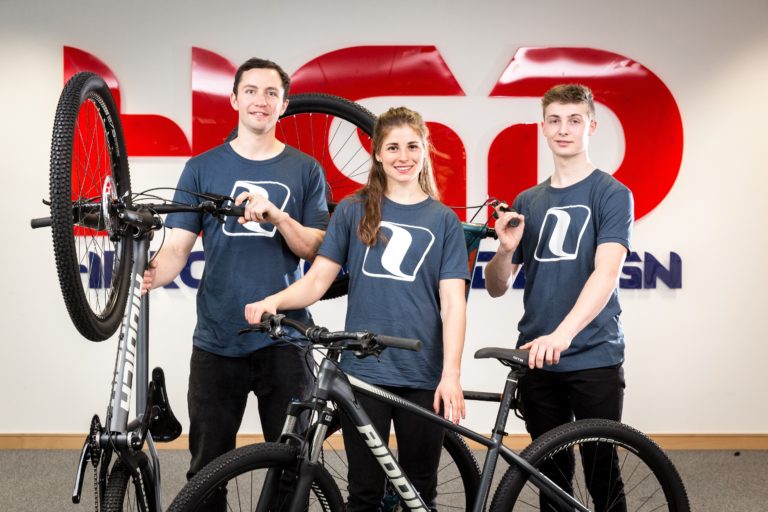 Manchester UK based bike brand Insync is backing a team of elite mountain bike riders as they take on one of the world’s most challenging cycling events. Insync, owned by India-based Hero Cycles, the world’s biggest bike manufacturer by volume, is sponsoring the team of three as they take part in the UCI Mountain Bike Eliminator World Cup.

The cyclists, the first mountain bike team to be sponsored by Insync, have been involved in designing the bikes they will ride during the event, which takes place in eight different countries. The innovative approach has seen the riders, who hail from England, Italy and Northern Ireland, drawing on their years of expertise in the sport to incorporate features into the design that will suit the challenging conditions of the event.

Having the team offer their input into the downhill bike will see the Insync brand taken straight to the top of the sport by drawing on the riders’ years of expertise. The bikes will eventually be available to buy as limited-edition cycles from Insync. The Mountain Bike Eliminator takes place over six months and takes in Spain, France, the US, Italy, Belgium, Holland, Germany and Austria.  A fast mountain bike format, it sees four riders at a time race over a technical course featuring natural obstacles such as jumps, bridges and rock gardens. Courses are typically between 500m and 1km, with racing lasting from 1.5-2 minutes.

Molloy, who has entered the event for the last 12 years, began as a rider in other teams before following his dream of becoming a team manager. The design features, drawn up at Hero’s Global Design Centre in Manchester, have focused on the particular geometry of the frame to suit the performance of the team.

He said: “I wanted to put together my own team based on my knowledge of other riders over the last few years and Insync has allowed me to do that at the level I wanted to. It’s not usual that riders would be involved in designing the bikes we’re going to ride but we wanted to create the perfect downhill bike that would give the highest performance in such a niche event. Insync’s tech is at the top of the sport and with our knowledge and their manufacturing we’ve come up with a top mountain bike.”

It will be the fifth time Weidmann has taken part in the World Cup and she is hoping to build on her previous success, which has seen her take fifth place in the event. She said: “I’m excited about the season starting and working with a really great partner in Insync. As a team we get to introduce the Insync brand to the mountain bike downhill World Cup, which is a really great honour.” Abhishek Pratap Singh head of Hero Global Design (pictured), said they were looking forward to breaking into the World Cup with the Insync brand.

He said: “Cycling can be an immense force for good. We want to raise awareness of cycling and the Insync brand in an exciting way which helps engage families in cycling as a way to keep fit as well as relax and unwind. We have worked with Harry previously and we were keen to partner with him to put together this elite team of riders for the UCI Mountain Bike Eliminator World Cup. The team has worked closely with the designers at the Hero Global Design Centre in Manchester to come up with an innovative design that will play to their strengths. The innovation we brought to these competition bikes is already helping us improve our high street MTB bike range. We look forward to following the team’s progress over the next six months and watching our partnership grow.”

Hero Cycles launched its new Insync brand and range of 75 bikes for the UK market in May 2018 at Old Trafford football ground. The range was the first designed by Hero’s new Global Design Centre in Manchester. The Insync range has four sub-brands Viking, Riddick, DeNovo and Ryedale and is the culmination of four years of work following Hero’s purchase of Manchester, UK based bike distribution house Avocet Sports in 2015. In February 2019 Hero announced it planned to launch the brand formerly overseas via its website www.insyncbikes.com

Hero Cycles Limited was founded in India in 1956. It is the largest bicycle manufacturer in the world by volume producing 19,000 cycles per day and 5.2million per year. This represents one out of every 20 of the world’s bicycles. Hero Cycles has manufacturing units in Ludhiana (Punjab), Bihta (Bihar) & Ghaziabad (UP). It is part of the Hero Motors Company which has revenues of $400million and $1.2billion in assets employing circa 8,000 staff.

In August 2015, it acquired British brand Avocet Sports with 51pc stake targeting high-end bicycle market in Europe and now has full ownership. In 2015, it also acquired Firefox Bikes – India’s largest premium bicycle brand with an established presence Pan-India through a network of 160 outlets. In 2016, it acquired a majority stake in Sri Lanka’s leading bicycle manufacturer BSH Ventures, further boosting its manufacturing capacity. As part of major expansion plans across Europe it launched the £2million Hero Cycles Global Design Centre (HGD) in Manchester, UK, in January 2017. The design hub is led by creative minds from across the world including innovators from India, Taiwan and Denmark.