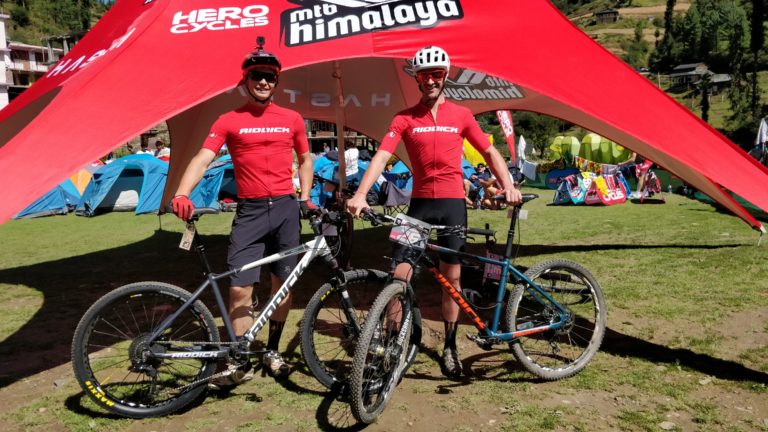 Britain’s Patrick Robinson and Harry Molloy have become the first UK cycling team to take on the Hero MTB Himalaya challenge, putting their Riddick mountain bikes to the test on one of the world’s toughest courses.

“The only thing missing was having to ride through people’s houses…it really did cover every kind of terrain.” A total of 72 professional and amateur riders from 15 countries departed the Indian city of Shimla on September 28 for the 2018 Hero MTB Himalaya.

The Hero Cycles-sponsored event is regarded as one of the best, toughest, most scenic and most cultural in Asia – a 650km course made up of eight stages over nine days. It sees competitors climb to a maximum elevation of 3,100m and pits them against some of the harshest terrain imaginable, surrounded by the panoramic backdrop of the Outer Himalayas.

The 14th edition saw 72 professional and amateur riders from 15 countries depart the Indian city of Shimla on September 28. A total of 53 would make it to the finishing post in Dharamsala on October 6. 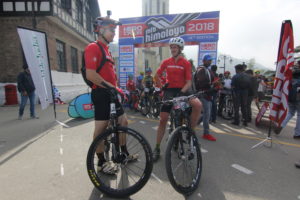 As well as putting their UK-designed Riddick bikes from Hero Cycles’ Insync range to the ultimate test, Patrick and Harry also became the first British team to take part in the challenge.

Patrick rode the Riddick RD900, while Harry opted for the Riddick RD800. Both were modified to not only meet each rider’s individual requirements, but also the unique demands of the punishing terrain they’d encounter during the race.

“They say it’s one of the most mixed terrain races in the world, bringing in roads, paths, alleyways and stairs,” said Patrick. “The only thing missing was having to ride through people’s houses. It really did cover every kind of terrain.

“There were a lot of sections where you were unsure whether to ride down or get off your bike. I’m used to riding stairs through all the urban downhills I do but a lot of riders were shocked.”

According to the Wakefield cyclist, even the most experienced guys in the field were questioning what to ride down and how hard to push.

Patrick said: “You’re thinking ‘how fast should I go around this corner?’ because there’s a 100ft drop on one side and there could be a bus coming or a cow in the road. You needed to be focused all the time. Sometimes going slower through sections could be the fastest option overall.” 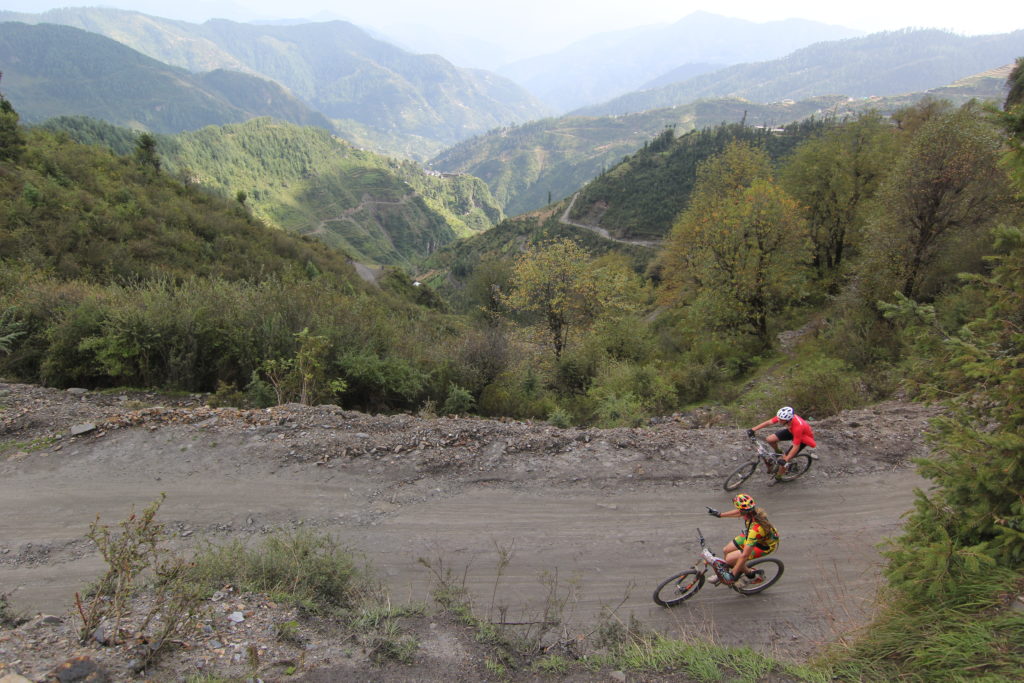 The 2018 Hero MTB Himalaya took riders on a 650km course from Shimla to Dharamsala.

Patrick had experience of the Riddick RD900 mountain bike, developed at Hero Cycle’s £2m design centre in Manchester, prior to taking part in Hero MTB Himalaya.

Earlier this year he bagged a third place during the Pedalhounds Enduro series while riding a factory version of the bike that featured a shorter stem. To cope with the demands of the Himalayas, Patrick chose to fit RockShox SID forks and Mavic XL Pro wheels, combining them again with a shorter stem and narrower bars to suit the course’s technical downhills.

“The upgrades were to reduce weight and add strength but when you’re on UK trails you wouldn’t really notice the difference,” he said. “I knew the hill climbs in India would be where I was weakest, so I wanted the setup to be as light as I could possibly get it. The bike was perfect. I got just one puncture halfway though and that’s nothing compared to what some other people were going through. Frames were breaking, wheels and brakes were going.

“This was definitely the toughest challenge the Riddick RD900 has been put through. We actually took a spare just in case but ended up lending it out to another rider from a different team.

“For people new to the sport wanting to progress, the RD900 is a great bike for introducing you to the mountain bike scene, trails and the more technical stuff.”

Tunbridge Wells-based cyclist Harry found himself equally as impressed with his Riddick RD800, describing it as solid choice for UK trails. 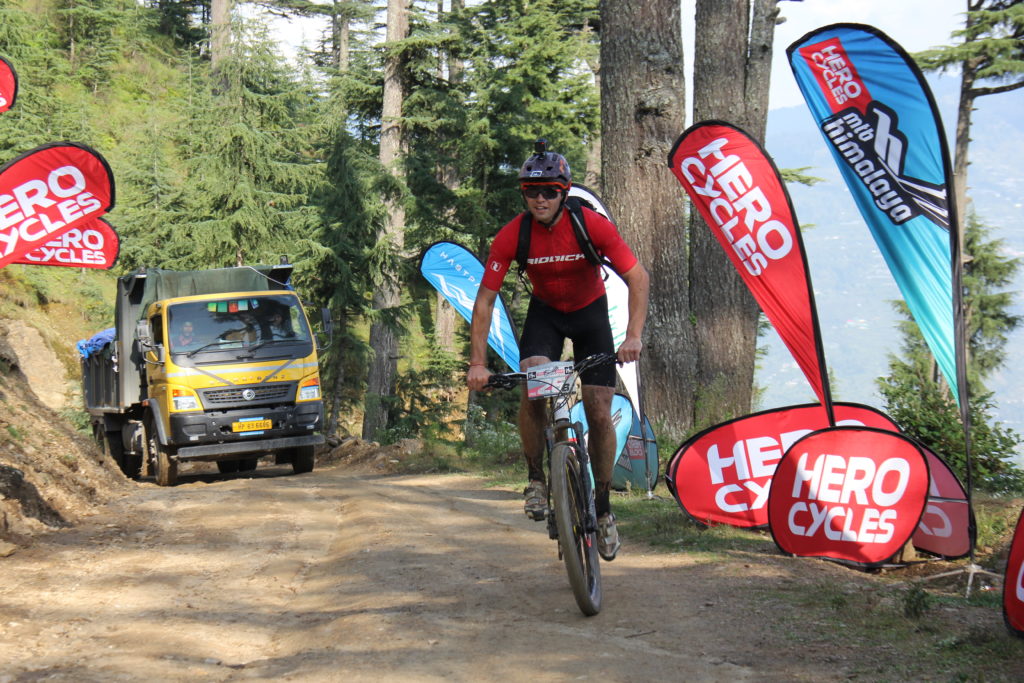 “For this style of bike you need a good balance and the RD800 holds it own really well,” he said. “For the race I had it set up a little higher at the front and made it a little more aggressive. The main thing was changing to a single speed front like the RD900 and a larger cassette on the back for the gearing, which worked out really well as there were some insanely steep climbs.”

He said: “I could ride it with confidence on the downhill sections pretty flat out and that’s where I made up my time. I also didn’t lose any time through the uphill sections as it was a great bike at climbing.

“To be out in the Himalayas riding a bike was just insane. I’ve never had to ride though rivers before which was quite cool. A lot of it was really rocky roads­, single tracks too. We even had to go over some mudslides. There was a bit of tarmac and gravel but mostly it was quite mountainous – this race had it all.

“Technically, from the type of riding I’m used to, the terrain was the joy – the struggle for me was to pick the right speed to go all day and plan for eight days. It’s a serious amount of riding compared to anything else I’ve done.”

Patrick’s goal switched from making the podium to completing the race after he injured his knee and elbow in a crash. Unfortunately for Harry, his luck was no better. He was unable to cross the finish line with his teammate thanks to an accident that led to a broken nose and put him out of the event.

Both riders agree that Hero MTB Himalaya was not only one of the toughest challenges they’ve faced, but also one of the most rewarding.

Having recovered from his injury, Harry is back in the UK running coaching sessions on his Riddick RD800, while Patrick’s thoughts are turning to upcoming races, including Colombia’s Medellin Urban Downhill and the Taxco Urban Downhill in Mexico.

Riders interesting in taking part in the 2019 Hero MTB Himalaya should visit: http://heromtbhimalaya.com/race

Insync offers 75 UK designed bikes across four brands Viking for road biking, Riddick for mountain biking and off-road, DeNovo for children the Ryedale women’s bike. Viking and Riddick are aimed at men and women and are more action bikes. DeNovo has been carefully designed for children with input from a paediatric physiotherapist to improve weight and reach dynamics of bike. Ryedale meanwhile is a carefully designed stylish urban bike which performs well and makes a fashion statement.

Target market: Action and adventure bike range for male and female cyclists of all ages.