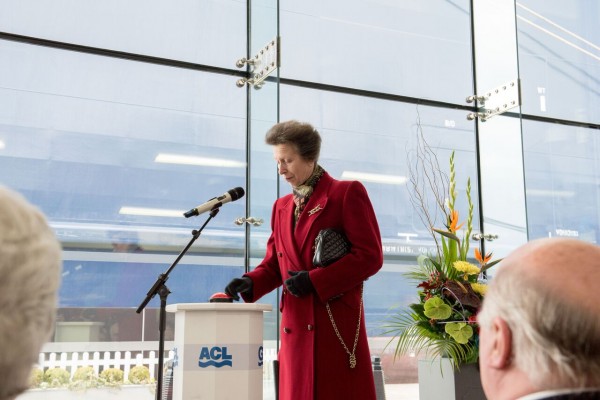 Crowds lined Liverpool’s iconic waterfront to witness the official Christening Ceremony of the Atlantic Sea. This was the first Royal Christening on the Mersey since 1960, ahead of a dramatic fireworks display and departure. 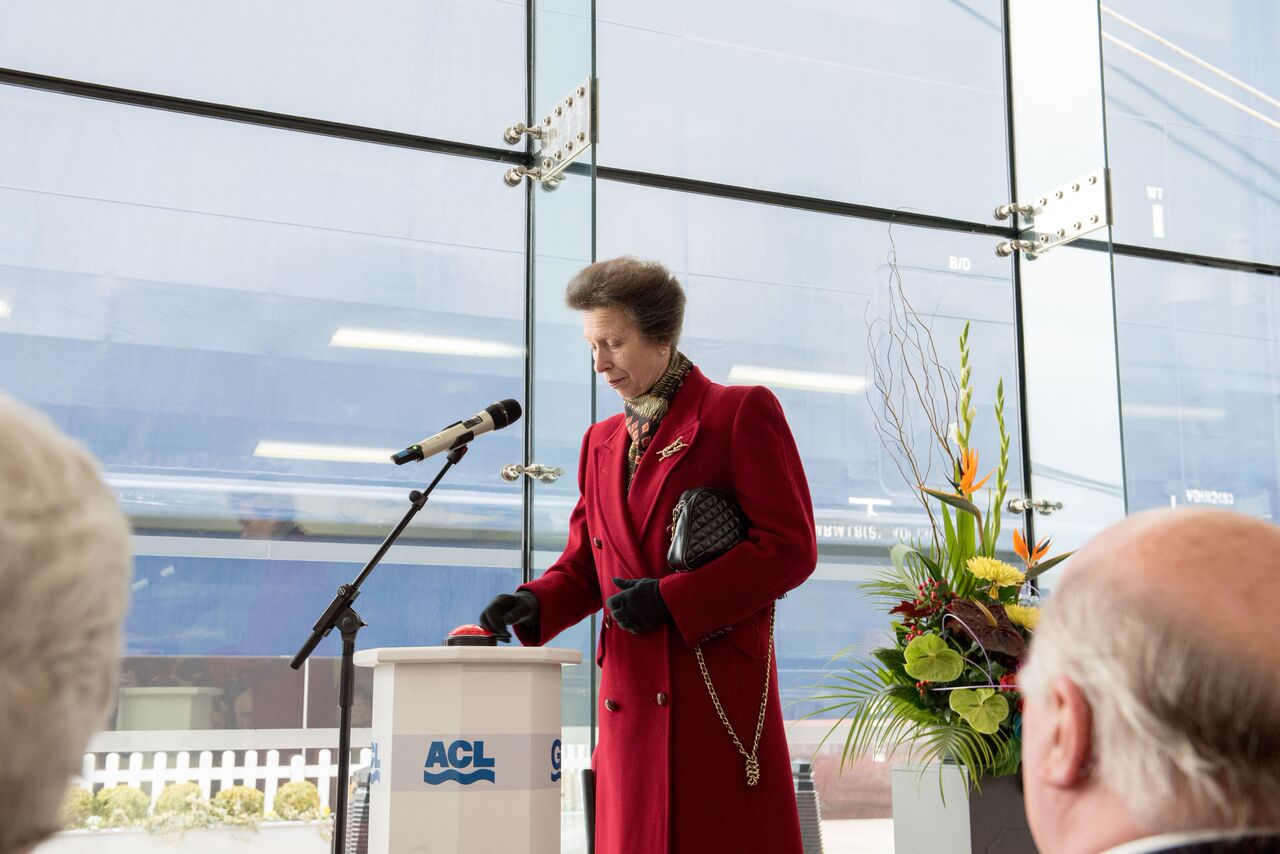 ACL’s UK Managing Director, Ian Higby said that the event marked a “historic new dawn” for ACL, which has operated between North America and North Europe since 1967.

“This was an unforgettable day for everyone at ACL,” he said. “It was wonderful to join our Liverpool and New Jersey offices together with our owners, the Grimaldi Family, the UK Shipping Minister, John Hayes and many distinguished guests in the presence of The Princess Royal. It was especially poignant to be able to thank the people of Liverpool and Merseyside who have supported us passionately since we first started business. Our ships have called Liverpool twice a week, every week since 1969 acting as a crucial link for the UK’s export and import trades. Our European HQ is now in Liverpool with our new purpose‐built office on Duke Street, the first built by a shipping line in the city since 1924. We have deep bonds with Merseyside where maritime is in the DNA of the people. We are proud to employ nearly 170 staff with half under the age of 40. In addition, ACL supports a substantial UK supply chain. More widely, the Christening sends an enormously powerful message to the industry. Our new fleet of Generation 4 (G4) CONRO vessels will replace the existing fleet of G3 ships and double our transatlantic capacity. This is a strong statement of the intent to continue to build our trade and customer Mr. Higby said that the new G4 CONRO ships are the largest of their kind in the world. All ships will call at Liverpool twice a week.

“We were very proud to announce, in the presence of the Royal Family and the UK Government that the new G4 vessels are registered in the UK and proudly fly the Red Ensign, with Liverpool as their home port

proudly displayed on the stern. It is important to emphasize that the Marine and Coastguard Agency (MCA) and its staff in Liverpool have been very helpful and supportive. Furthermore, we were delighted to

recognise Peel Ports for its support in widening the entry to the basin of Seaforth Dock ensuring our new ships will fit through the lock to their berth. The LEP, Liverpool City Council, Mersey Maritime, local MPs, the

cruise line terminal, Network Space, ERDF and Chrysalis and many others have also been hugely supportive of our operation and our new office building. We are grateful for the RGF support that we received in our centralisation project.

“Merseyside has a rich maritime history, and the future is looking even brighter, thanks to the launch of these new generation transatlantic ships which will bring jobs to Liverpool. This major project will add to the growing number of ships flying the UK flag and support this Government’s efforts to grow our world class maritime industries.”

Each of the new G4 vessels, which were built in Shanghai at Hudong‐Zhonghua Shipyard, can carry 3,800 containers, 1300 vehicles and have 28,900 m2 high and heavy Roll‐on/Roll‐Off capacity . The Christening also saw a blessing in memory of the ACL G2 vessel, the Atlantic Conveyor, which was sunk during the Falklands War with a loss of 12 crewmen on May 25, 1982. Six Cunard seamen, including Captain Ian North, died when the ship which had been requisitioned by the Royal Navy, was struck by two Exocet missiles. Six Royal Navy personnel also perished. A permanent memorial to their sacrifice stands at Liverpool Parish Church.

ACL is a major shipping company owned by the Grimaldi Group of Naples, Italy. The company’s headquarters are located in Westfield, New Jersey USA while the European HQ is based in Liverpool, UK. ACL has offices throughout Europe and North America.

ACL is one of the largest ocean carriers operating at the Port of Liverpool’s Royal Seaforth Container Terminal. Peel Ports Group invested in Royal Seaforth to accommodate ACL’s new fleet of G4 vessels, creating a dedicated vehicle storage area with sufficient capacity to handle ACL’s cargo requirements, and widening the passage into the dock basin so that the large G4s could fit into the terminal.

ACL’s connections with Liverpool began in 1969. Cunard Line was one of its original shareholders and when Liverpool was chosen as a main port in ACL’s Atlantic schedule due to its proximity to the British industrial heartland as well as Scotland and Ireland. One of ACL’s second-generation (G2) vessels, the Atlantic Conveyor, sunk during the Falklands War with a loss of 12 crewmen on May 25, 1982. Six Cunard seamen, including Captain Ian North, died when the ship, which had been requisitioned by the Royal Navy, was struck by two Exocet missiles. Six Royal Navy personnel also perished.  A memorial to their sacrifice stands at Liverpool Parish Church.

Atlantic Sea will be first ship Christened by ACL in Liverpool since the Company’s start of operations in 1969.  The last ACL vessel naming in the UK took place at Swan Hunter on Tyne in 1984 with the launching of third generation (G3) vessel, Atlantic Conveyor.ACL has doubled its workforce in Liverpool since 2013. Forty percent of their workforce today is under the age of 30. ACL has received RGF funding for the business centralisation project and ERDF support for its office development in Duke Street.

Each of the five new vessels, which were built in Shanghai at Hudong-Zhonghua shipyard, can carry 3,800 containers, 28,900 m2 high and heavy Roll-On/Roll-Off cargo and 1,300 vehicles. The new vessels carry almost twice the amount of cargo compared to the five ships they are replacing.

The innovative design of ACL’s new CONRO vessels increases capacity without significantly changing the dimensions of the vessel. The G4s are bigger, greener and more efficient than their predecessors. The internal vehicle ramps are wider and shallower and the vehicle decks are higher (up to 7.4 meters) with fewer columns, enabling much easier loading and discharge of oversized cargo. Emissions per container unit are reduced by 65%. The fleet continues to employ cell-guides on deck, a feature that will allow ACL to extend its record of never having lost a single container overboard in 30+ years.

ACL was formed in 1965 by a consortium of five shipping companies, Wallenius Lines, Swedish America Line, Transatlantic Steamship Company and Holland America Line. These were joined by Cunard Steamship Company and French Line (CGT) in 1967. ACL was purchased by the Grimaldi Group of Naples, Italy in 2001. The Grimaldi Group is one of the largest operators of multipurpose RORO cargo ships and passenger ferries in the world today, with services connecting North Europe, the Mediterranean, West Africa, South America and North America. For more information visit: www.aclcargo.com