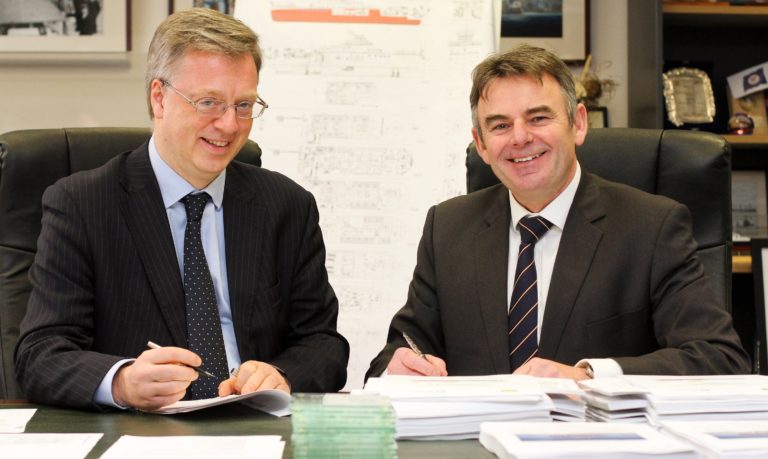 The deal has been sealed for a major marine and engineering services company to start work on a new £200m polar research ship to maintain the UK’s position at the forefront of climate and ocean research.

World-famous historic Birkenhead shipyard Cammell Laird saw off massive competition from Europe and beyond including Korea and Singapore to build the state-of-the-art vessel for the government-funded Natural Environment Research Council (NERC).

Bosses met to sign the contract late on Friday, November 19 and detailed design work gets underway immediately. It is expected that full production will start in June next year, and on completion the vessel will be operated by NERC’s British Antarctic Survey (BAS).

Cammell Laird chief executive, John Syvret CBE, said the agreement with NERC moves Cammelll Laird into its next chapter and will secure around 500 jobs for local people, boosting the economy in the region.

Cammell Laird is expected to cut steel in June 2016 and deliver the next-generation polar research vessel ready for operation by 2019.

It will operate in both Antarctica and the Arctic, and will be able to endure up to 60 days in sea-ice to enable scientists to gather more observations and data.  The ship will be the first British-built polar research vessel with a helideck to open up new locations for science and will be one of the most sophisticated floating research laboratories operating in the polar regions.

Cammell Laird was selected by NERC through a full competitive procurement process. NERC receives around £370m annually to invest in environmental science research in the UK.

NERC chief executive Professor Duncan Wingham said: “This new research ship, which is expected to become operational in 2019, will be equipped with on-board laboratory facilities and will be capable of deploying robotic technologies to monitor environmental changes to the polar oceans and will help UK scientists continue to lead the world in understanding our polar regions.

“Changes in both the Antarctic and Artic marine ecosystems affect the UK’s environment and economy, particularly in industries such as fishing and tourism. The Natural Environment Research Council funds polar research so that as a nation, we can develop policies to adapt to, mitigate or live with environmental change.

“This new polar ship will be a platform for a broad range of science, researching subjects from oceanography and marine ecology to geophysics.”

He said: “Signing this contract is another great day and proud moment for myself and the company. It is tremendous news for Merseyside and the UK maritime industry. It is further a fantastic endorsement of the world-class skills and experience of our workforce and the calibre of our facilities which are among the best in Europe. We must thank our MP Frank Field for his unwavering support for Cammell Laird being a driver of long term employment for people of all academic backgrounds as well as a wealth creator for the economy. In addition, we would like to thank the Chancellor George Osborne for recognising that Cammell Laird is a champion brand for British industry and that we can play a key role in the development of the Northern Powerhouse driving growth in marine engineering, and the renewable and civil nuclear energy markets.”

Cammell Laird managing director Linton Roberts said the new contract is expected to secure 400 jobs at Cammell Laird and a further 100 jobs within the local supply chain.  He said Cammell Laird invests heavily in its apprenticeship scheme and would plan to recruit 60 apprentices throughout the term of the contract.

“The new vessel will be yard hull number 1390 and with its combined science and logistics capability will be one of the most technologically advanced commercial ships ever constructed in the UK.  Cammell Laird is well prepared for this project due to the extensive experience we have gained over recent years when delivering large blocks of our Navy’s flagships, the  ‘Queen Elizabeth’ and ‘Prince of Wales’, as well as important new commercial vessels for Western Ferries and Strangford Lough. Our numerous and highly complex service life extension projects for the Royal Fleet Auxiliary have also given us invaluable experience in integrating and commissioning a wide variety of relevant new technologies. We are very excited to be working with NERC and BAS to deliver a world-class British built flagship to support world-class British polar science.”

Robotic submarines and marine gliders will collect data on ocean conditions and marine biology and deliver it to scientists working in the ship’s on-board laboratories. Airborne robots and on-board environmental monitoring systems will provide detailed information on the surrounding polar environment.

Director of BAS Professor Jane Francis said: “This new research ship will be a tremendous asset to the UK polar science community. Our science and operational teams have been working closely with research colleagues from Britain’s leading universities and institutes to help create a world-leading science facility. We very much look forward to seeing our ideas become a reality. Crucially, the ship will have the capability to deploy advanced technologies being developed currently in the UK. These will allow us to capture new ocean and ice data from places that would otherwise be inaccessible. This is a very exciting time for UK polar science.”

Cammell Laird is one of the most famous names in British industry with roots tracing back to the early 19th Century.

The business is located on the River Mersey, in the Liverpool City Region, on the West Coast of England. It is in the centre of a marine cluster, with direct access to many support services. It has a 120 acre site with four dry docks, a non-tidal wet basin, large modular construction hall and extensive covered workshops.

Cammell Laird specialises in military ship refit, commercial ship repair, upgrade and conversion and heavy fabrication and engineering. It deals with a wide variety of projects ranging from specialist offshore conversions and fabrication, commercial ship-repair through to the refit and upgrade of highly complex naval auxiliaries. It has also recently re-entered the ship-building market.

The business is further active in the energy sector. It has become a hub of the off shore wind industry and it is offering its facilities and highly trained workforce of engineers for work in the civil nuclear sector and the off shore oil and gas sector.