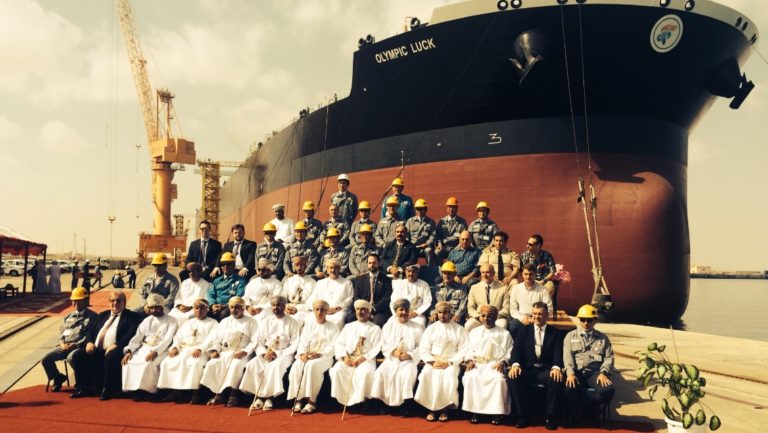 Oman Drydock Company (ODC – see notes to editors 1) says it intends to unleash its potential to become one of the leading shipyards in the world for new build, conversion and repair after completing its first major conversion contract and 300th drydocking.

The $1.5bn shipyard, which is one of the biggest and best equipped in the world launched in 2011 in the Middle East’s new ports and logistics city of Duqm (Notes to editors 2). It announced it had completed the conversion of Greek-owned crude oil carrier Olympic Luck (see notes to editors 3) at a special ceremony at the shipyard. Vessel owners Springfield Shipping Company joined the event to celebrate the completion.

ODC chairman Dr Abdulmalik Bin Abdullah Al Hinai said the shipyard is developing a formidable reputation for shiprepair and conversion services and is now gearing up to attack the global shipbuilding market.

“We are extremely proud to announce the completion of this project which saw the Olympic Luck converted from an Oil Bulk Ore carrier to a Very Large Crude Carrier,” said the ODC chairman. “This was the first major conversion job we have undertaken and is a terrific showcase for the world class infrastructure, facilities and workforce we have.

ODC Chief Executive Yong Duk Park said the conversion was helped enormously by the highly sophisticated expertise of Korean shipbuilding giant DSME which is ODC’s partner. Mr Park said few other shipyards in the Gulf can match the level of conversion and ship building skills at ODC’s disposal because of its partnership with DSME.

“We removed bulk head covers and installed new swash bulk heads, making the vessel multi-functional for more efficient loading,” he said. “We used DSME’s broad knowledge of precision engineering and design innovation to inform our construction methods. For the Olympic Luck we fabricated close to 40 blocks between 50 and 80 tonnes. This enabled us to build in larger portions, reducing on time and cost.” “This was a unique project which helped to show the professional expertise of ODC,” he said. “It was the first time ODC has taken on a project of this scale. Our decision to award the contract was based on ODC’s promise to complete the project with high quality.

“We trusted ODC and we have been rewarded by its willingness to find efficient solutions. Trust requires hard work, the right attitude and a focus on the long term. We would like to thank ODC and all ship yard supervisors and workers for completing this work to ensure the Olympic Luck can transport oil safely around the globe.”

“Our ambition is to be renowned as the best drydock in the Middle East,” he said. “ODC, the port of Duqm and the maritime sector, more widely, have fundamental roles to play in Oman’s future economy.  We encourage young people in Oman to grasp the glittering opportunities that the maritime sector offers for long term fulfilling careers. It is important emphasize that the maritime industry offers opportunity for people of all academic backgrounds.

“More specifically ODC’s geographical location in Duqm thrusts it into pole position for the Asia to Europe shipping route as well as the East African and Indian off shore industries. Duqm’s location means vessels do not have to greatly deviate their course helping to slash costs and the time required for drydocking. This can save days in time, and a huge amount of money, which is such a key factor for shipping operators balancing tight budgets.

“ODC has a number of very strong unique selling points that give us a competitive edge. Our dry docks can accommodate any size of vessel (see notes to editors 1). The shipyard has one of the longest docks in the Middle East at 2.8km. If desired we still have the space and planning permission to double in size again.

“Furthermore ODC has unrivalled painting services and the ability to deal with sludge and slops disposal. Our climate provides a perfect environment for painting that few other yards can offer. The slops and sludge terminal has a capacity of 10,000 cubic metres which is the largest in the Middle East. We can save up to three days sailing time as we can deal with it all here on site, there is no need to sail to another location.”

ODC has developed a robust track record on a wide variety of ships from VLCCs to container ships, LNG and LPG carrriers to chemical carriers, dredgers, RO-ROs and barges. Its clients include Oman Shipping Company. It is rapidly developing its workforce and skill base, using world class workmanship from more than 12 nations, while boosting training and infrastructure.

In 2006, the Omani Government established Oman Drydock Company (ODC) in Duqm located in the central area of Oman in order to develop and diversify heavy industries in Oman in addition to the oil refinery industry.

At the same time Daewoo Shipbuilding and Marine Engineering Co. Ltd. (DSME) of Korea signed a contract of management and operation of ODC. Currently 30 professionals above manager class including the CEO from DSME are working for ODC.

ODC has a total of 1.3 million square meters of land in Duqm for its operations. It is equipped with state-of-the-art facilities including:

A slop and sludge treatment facility including slop tanks to store 10,000 cubic meters

ODC is pushing its services as a centre of excellence for the repair of container ships and LNG carriers (LNGC). This covers areas such as cargo containment systems and the supply chain of various materials such as INVAR, insulation boxes, membranes, prefabricated panels and cryogenic safety valves.

ODC is also targeting growth in the offshore market where it can provide repair and conversion services to jack up drilling rigs, drill ships and FPSOs. It also offers a range of engineering, testing and trial services for offshore projects including the construction of offshore accommodation barges, offshore jackets and platforms as well as top-side modules and sub-sea pipeline manifolds.

ODC, forms a centre piece of His Majesty the Sultan’s formidably ambitious 10 year $15bn masterplan to transform the town of Duqm into ‘an economic powerhouse’.  Over the next 20 years Duqm is expected to see supercharged growth driven by the thriving shipping, petrochemical, logistics and offshore industries. The Duqm master plan is part of the Sultan’s 2020 vision which seeks to diversify Oman’s economy.

Duqm is located 450km (280 miles) south of Muscat, based in Al Wusta Govornate.

It is undergoing a $15bn investment to create a world leading multi-industrial, maritime, commercial and logistics hub. Plans include a petrochemical factory, a refinery, an airport, beach-front hotels, and housing for more than 100,000 people. Further plans are taking shape to build roads, pipelines and railways to link up with Saudi Arabia and the United Arab Emirates.

It is the largest development of its kind in the Middle East and North Africa (MENA), and among the biggest globally.

Attractive and convenient for foreign investors – package of incentives for setting up operations with tax breaks and land deals.

The business area has attracted investors from Asia, Europe and the Americas. The authority promises to provide a full range of infrastructural facilities for investors.

Total land area of 1,770 sq km is divided into two parts, designed to enable the Authority to gradually expand it.

Currently focused on an 800 sq km area which includes the dry dock.

Construction work on a major refinery is expected to start in 2015 with completion slated for 2018.

The project aims at enhancing the Sultanate’s status in the field of petrochemical industries, while generating significant job opportunities for Omanis.

Olympic Luck is a continuation of the Onassis legacy as the most famous ship owner in 1950s and 60s. Springfield Shipping Company’s portfolio of vessels belongs to the Onassis Foundation, and 35pc of profits are donated back to the foundation. This helps to fund a variety of projects including scholarships and new build hospitals.