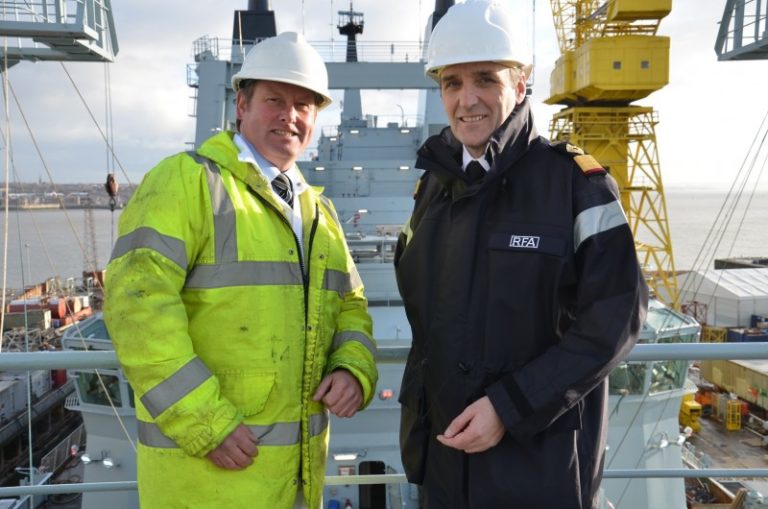 The massive 10-month refit is the biggest ever undertaken by the yard since it began its through life support ‘cluster’ contract to maintain nine of the 13 ships in the RFA flotilla in 2008 (see notes to editors).  The RFA Fort Victoria is one of the largest vessels operated by the British Ministry of Defence and is at the forefront of British naval operations.

“The refit of RFA Fort Victoria is a great example of what can be achieved through collaborative relationships developed within the cluster contract support model. Cammell Laird have a proven track record in supporting RFA ships on a worldwide basis, and I am delighted that following this complex package of work the ship is now rejuvenated for future operations.”

“I congratulate the RFA and Cammell Laird cluster team for delivering such a good job so efficiently,” he said. “I would also emphasize again the tremendous importance of the RFA cluster contract to Cammell Laird. The RFA’s investment in us enables Cammell Laird to employ and train workers including apprentices, improve our infrastructure and contribute millions of pounds to the Merseyside community and supply chain.”

Cammell Laird managing director Linton Roberts said the refit has been the biggest single contract in the business in 2014.

“It has seen more than 450 men work on it for nearly a year including apprentices,” he said. “The successful completion of such a complex and demanding refit will be testament to the pioneering benefits of clustering. Cammell Laird has developed in-depth knowledge of the Victoria having worked on her for more than 10 years, the last six years under cluster. That experience and expertise of working together is enabling us to undertake bigger and more difficult refits.”

“It is hard to underestimate the scale of this job,” he said. “It has certainly been the most challenging to date and required all the lessons we have learned working with the RFA under the cluster contract. Completing this refit is a formidable achievement for the yard and everyone involved. We did undertake a lot of planning, particularly around big jobs like the removal and replacement of six diesel generators which saw the ship cut open on both sides of the hull and then once the generators were installed the shell plating was then refitted and fully welded.  We also pre-manufactured pipe work, steel work and ordered long lead time equipment well ahead of the start of the contract in January. This meticulous planning paid off, maximising the speed and efficiency of the refit which was on a tight timeframe. This included planning for dry-docking the Fort Victoria twice to allow another RFA vessel refit to be completed in No5 Dry-dock.”

ABOUT RFA THROUGH LIFE SUPPORT

The RFA Through Life Support ‘cluster’ contract provides engineering support to the RFA flotilla and includes capability insertion allowing the ships to be fully integrated with the Royal Navy. The cluster contract is Cammell Laird’s biggest single contract. It is reviewed every five years based on performance and value for money.  The contract was extended in November 2012 for a further five years to 2018.

The global reach element to the contract also sees Cammell Laird deliver extensive support to the fleet around the world.

Cammell Laird is one of the most famous names in British industry.

The business is located on the River Mersey, in the Liverpool City Region, on the West Coast of England. It is in the centre of a marine cluster, with direct access to many support services. It has a 120 acre site with four dry docks, a large modular construction hall and extensive covered workshops.

Cammell Laird specialises in military ship refit, commercial ship repair, upgrade and conversion and heavy fabrication and engineering. It deals with a wide variety of projects ranging from specialist offshore conversions and fabrication, commercial ship-repair through to the refit and upgrade of highly complex naval auxiliaries. It has also recently re-entered the ship-building market.

The business is further active in the energy sector. It has become a hub of the off shore wind industry and it is offering its facilities and highly trained workforce of engineers for work in the civil nuclear sector and the off shore oil and gas sector.